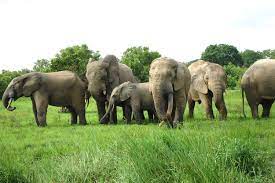 Elephants, rhinos and other large animals can play a key role in the environment by boosting plant diversity and tackling climate change and should be protected, according to a new report.

Large animals, such as lions and leopards, help plants to grow, fertilising them and improving the soil more generally with their excrement.

They also help by spreading seeds and they protect areas from wildfires by creating gaps in the vegetation as they graze, trampling down some grass and breaking up thorny bushes.

This allows more light to reach the forest or other wildlife floor, giving lower-lying plants a better chance to grow.

And as vegetation gets eaten, trampled or moved about as they graze, open surfaces are exposed on the ground, reflecting back more sunlight and giving a strong cooling effect, according to the report, commissioned by African wildlife charity Tusk.

“These findings show just how important it is to protect Africa’s giants, which are under increasing threat from poaching, habitat loss, and human wildlife conflict,” said Tusk chief executive Charlie Mayhew.

Dr Susan Canney, an academic at Oxford University who worked on the report, said: “Research is increasingly demonstrating the value of diverse, intact ecosystems and their ability to deliver multiple benefits, including climate change and biodiversity loss mitigation.

“Ecosystems require all elements of the web of life – animals, plants, soils, ocean sediment and so on – in order to function optimally.”

Nick Maughan, a member of the Tusk board, added: “If treasured animals such as elephants, lions and rhinos disappear, they will leave a big gap – not just physically but also in the work they do.”

The report also involved researchers at the universities of Sussex and Aarhus in Denmark.

It is published to coincide with the United Nations’ World Wildlife Day today, which this year centres on the theme of “Recovering Key Species for Ecosystem Restoration.”